The Legal Defense Fund (LDF), which is a part of the National Association for the Advancement of Colored People (NAACP), is famous for winning lawsuits, like Adams v Richardson. However, the LDF also organized national, state, and local groups to advocate for Civil Rights.

The LDF encouraged the formation of a North Carolina group composed of alumni from the state's five historically black colleges and universities (HBCUs). The North Carolina Alumni and Friends Coalition (NCAFC) was established in 1973. 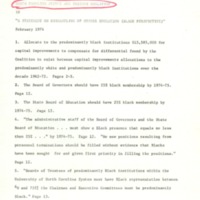 N.C. Alumni and Friends Coalition (Black Perspective) to Board of Trustees, February 1974