Activists and Authorities focuses on May 1970 and the events surrounding the write-in election of Cathy Sterling to Student Body President and the post-Kent State shooting. These actions help show the dramatic changes on NC State's campus from the 1960s to 1970s.

Hayley Moll is currently pursuing her MA in Public History at NC State. She loves many different areas of history, but what she loves most about it is that it is always changing, giving her something new to learn every day! Lauren Roland is a second-year graduate student in NC State's Public History program and a collections intern at the North Carolina Museum of History. Her primary research interest is twentieth-century American history. Born in Winston-Salem, Nathan Johnson received his BA from NC State in 2011. He currently works at the NC Museum of Art while completing his MA in Public History at NC State. Samantha Smith is passionate about collecting stories from people who lived through dynamic times. Her love for collecting and engaging stories with a larger historical narrative transferred to her exhibit in Activists and Authorities when she conversed with Cathy Sterling about her experience as the first female Student Body President. (Fall 2014) 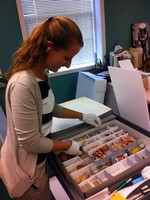 This photograph epitomizes my historical and career interests because it pictures me doing what I love. I had the unbelievably incredible opportunity to work at the Greensboro Historical Museum in summer 2014 in their collections department. I learned so many amazing things while working there. I was able to inventory their dolls collection, creating condition reports of each doll as I worked. By the end of my project, I had inventoried the entire collection, taken photographs of almost every doll in the collection, and rehoused several of the dolls to create a better environment for their future preservation.

This internship served to reinforce my resolution to work in the museum field in my future career. I have always loved history, and being able to touch history firsthand made me realize that this is indeed what I want to do with my life. While I love researching history and learning new facts about our amazing world, that is only half of the equation of history. The other half lies in the field of public history, in historic sites, museums, heritage sites, and pieces of heritage - both tangible and intangible.

If history merely stops at the academic field, it has only done half its job because history means nothing without an audience. The field of public history helps bring academic history to the average man, woman, and child, and makes it interesting for them. Public history uses every tool in its arsenal - whether it be digital history, the written word, or interactive exhibits - to envelope people in history and help them connect to the past, and I cannot wait to dedicate the rest of my life to this pursuit!

The son of German immigrants, Zoeller was born in Tarboro, in 1864. His father, Edward Zoeller, arrived in 1860 with his wife, Philipina Boza, and made a living there as a painter. Some of Edward Zoeller’s frescos still exist today in the Tarboro Historic District. William H. Zoeller apprenticed at Bachrach’s Studio in Washington D.C. before partnering with another local photographer, John F. Engel, in the 1880s. In 1895, he married Carry Estella Hainey, and they had two daughters. Zoeller operated a studio in Elizabeth City from 1892 into the 1930s. He died in 1936, after which his son-in-law took over the studio.

I scanned this picture from a glass plate negative during my internship at the Museum of the Albemarle. In addition to my normal work, one of my long-term projects from the summer was to digitize a collection of about 1,000 glass negatives from Zoeller’s Studio. While scanning these images, I became curious about the photographer, W.H. Zoeller, as well as the production of glass plate photography. So I began researching into local photographers in the region.

At the end of the summer, I published an article in the Daily Advance about how historians use photographs to ask historical questions. The response to the article was encouraging. People in the community called the museum asking about the photos because they knew that their family members had their portraits taken at Zoeller’s Studio. Another was a reenactor who used to portray Zoeller for certain events. What started as a digitization project became a great opportunity to engage with the public about history.

The Technician was an important source of news, expression and opinions throughout the turbulent month of May 1970. It gave space for leaders such as Student Body President-elect Cathy Sterling and Chancellor John Caldwell while also providing a forum for students who had little other outlet to be heard. My interest in the post-Kent State protests was my father's relation to the same event over a thousand miles away. In Massachusetts at Amherst, the protests were much more violent, shutting down the entire campus. The story always fascinated me, and I was especially curious about what these national protests looked like on my campus. 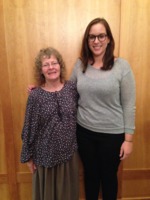 On November 3, 2014, I had an appointment with Special Collections at D. H. Hill Library to look through the Cathy Sterling Collection. Serendipitously, I learned that Cathy Sterling would be in the library that night for the exhibit opening of "Leading the Pack," an exhibit about NC State Student Body Presidents. At the opening, Rebecca Lowe and I approached Ms. Sterling, introduced ourselves, and told her about the "Activists and Authorities" exhibit. She was thrilled to hear that our group was writing about NC State in the 1970s and invited us to her home in Chapel Hill to do an interview.

The following week, I met with Ms. Sterling at her residence in Chapel Hill for an interview. I brought her a hand-potted mug that had an abstract shape of North Carolina on it and some cookies from Trader Joe's. Over a pot of tea, Ms. Sterling told me all of the emotions, challenges, successes, and struggles she faced as the first female student body president at NC State. She is a captivating and eloquent speaker, and before I knew it two hours had passed.

I am very grateful that I had the opportunity to meet with Ms. Sterling to hear about her perspective during the 1970 protests at NC State. She revealed a lot of information that I was unable to find in the sources. It was a pleasure meeting with her, and I hope my exhibit accurately reflects her memory while also connecting her remembrances to the larger historical context of NC State in the 1970s.