Race & Space explores NC State's long process of racial integration from 1965-1985. With a thorough investigation of the student body, the workplace, the athletic department, and the Raleigh community, Race & Space argues that NC State's integration was not a singular event but a series of spatial negotiations on and around campus.

Josie Titus is a second-year Public History MA student graduating in 2015. She enjoys researching 20th-century European and American history and exploring ways in which the public perceives and understands military history. Mandy Benter is a second-year MA candidate at NC State with an emphasis in Museum Studies. Her professional interests include public programming, oral history, and exhibit development. Her historical interests largely fall within modern American History with a special emphasis on labor and race relations. Sam Vandermeade is a second-year Public History MA student at NC State. Her research interests are 20th-century American cultural and gender history. (Fall 2014) 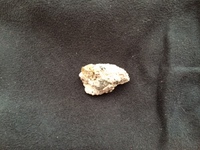 This is a piece of the Berlin Wall given to me by my uncle. He was in the Army and stationed in Germany when the Wall fell in 1989. It was a very tense few months for him and his fellow service members in Germany; no one knew how the Communist bloc was going to react to such a momentous event. Eventually, people began chipping away at the Wall and my uncle joined in, gathering a few pieces of the Wall to give to his family.

After high school, I joined the military and served for 4 ½ years. A few months after I transitioned out of the Army, my uncle surprised me with this small piece of the Wall. It was one of the last pieces that he still had and wanted to give it to someone who could understand the importance and meaning of not only the piece of Wall, but why he was stationed in Germany in the first place. Even though my uncle and I are not particularly close, this ugly piece of concrete signifies our connection to each other and to the past.

Artifacts can change the way people engage with the past. History is often taught with textbooks and documents, but historical objects link people to the past in a way documents cannot. This small piece of the Wall does not look significant and certainly is not visually pleasing, but it connects me to a historical event my uncle witnessed and was a part of; helping me to connect to him as well. I believe it is important to engage people with history through visual and kinetic representations of the past. Artifacts elicit different perspectives, emotions, and insights that offer the audience a chance to experience history rather than just reading about it, and at the same time relate to the people around them. A piece of the Berlin Wall is more than just a piece of concrete to me, and I want others to be able to share their own meaningful connections to the past. 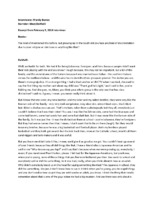 Like a true public historian, my biographical source is not my own---attached is a partial transcript from an oral history I conducted with Mary DeMolli in Spring 2013. This interview is extremely significant to me, because it solidified my love of oral history and furthered my desire to share overlooked stories.

I first met Mary while conducting my first graduate school project, an exhibit on the 1954 integration of Raleigh’s Cathedral Latin High School. As an oral history novice, I went into a group interview with very direct questions, keenly looking for a sound bite or awe-inspiring quotation. Yet, when those septuagenarian schoolmates began to tell their stories, I knew that I had approached the story all wrong. Their school integration was just one moment, informed by a complex past and shaped by recent memory. Mary DeMolli’s accounts were especially gripping; she described a childhood full of loss, pain, and survival. After my interview was over, I knew I wanted to interview Mary again, I just did not know how.

Luckily, Mary’s Lebanese heritage prompted me to interview her for NCSU’s Cedars in the Pines monthly newsletter. By that time, I was fully versed in oral history theory and methodology. I gathered a few life-in-review questions, found my recorder, and went ready to listen. The result was the best oral history I have ever conducted. Because I believed in Mary, she trusted me.

In many ways, Mary DeMolli’s oral history epitomizes my training as a public historian. I have always been curious, and I have always appreciated a good story; those instincts initially led me to Ms. DeMolli. However, as I grow and develop within the field, I find I am less motivated by the story and more interested in the people telling them. I now understand that public history is not meant to produce results, but invite connections.
Ultimately, Mary DeMolli’s interview taught me several important lessons that I remember today: everyone has more than one tale; stories result in the questions one asks, and, if you make the effort, you are always welcome to ask again.

I found this propaganda poster while researching a project on the ways in which advertising and government propaganda depicted women during the World War II. As I delved deeper into my research, I found a wide and glaring chasm between the real experiences of women during the war, and the shiny, rosy-cheeked, romantic images we as Americans have come to associate with “the Greatest Generation.”

While these lovely young WACs (Women’s Auxiliary Corps) gaze purposefully off into the distance, their real life counterparts were often denigrated by their male peers, relegated to “pink collar” jobs, and dismissed when they got too old, too pregnant, too sassy, or too interested in male soldiers. Government recruitment certainly did not reflect this reality and instead promised women things like “victory waits” and that servicewomen’s “eyes have seen the glory.” It seems unlikely WACs found any glory at the bottom of wastebaskets or in reams of office paper. Eight hundred thousand of women likely did not feel victorious when they were fired from the aircraft industry in a single day at the end of the war.

This image is important to me because it reminds me of why I study history. Because looks can be deceiving and what you see is not often what you get. Many groups are still waiting for their whole story to be told. Chimamanda Adichie has spoken evocatively of “the danger of a single story.” This ad is a single story. Doing history is a way of telling the others.

← The Illusion of Inclusion
Race & Space