The Illusion of Inclusion: Creating Space and Crafting Identity in The Nubian Message, 1990 to 2014 questions the idea that the United States is a "post-racial" society by exploring the history of The Nubian Message, North Carolina State University's first African-American student newspaper. From its founding in 1992 to the present, The Nubian Message has been a critical and outspoken opponent of racism on campus and in the larger community.

When I first heard Nina Simone’s “Mississippi Goddam” in my introduction to civil rights class as an undergraduate, I wasn’t sure what to make of her powerful and confrontational words. Simone’s deep anger at racial injustice and her implied rejection of a nonviolent civil rights movement confused and angered me. This was not the civil rights movement of popular imagination where peaceful discourse and civil disobedience reigned supreme. Instead, Simone suggested a movement of people who felt deeply alienated from the country and who questioned the very goals of integration and citizenship. Even more problematic, Simone wasn’t a voice that could be simply categorized as “radical” and forgotten about as representative of a small and insignificant wing of a largely peaceful civil rights movement. Instead, Simone demanded to be heard and recognized as a complex figure that was vastly popular in her time among a wide swathe of African American communities.

Nina Simone has become my muse as I explored the politics and activism of the later civil rights movement as it developed post-1965. Simone made me confront my own assumptions about what equality should look like and how people should strive to achieve it. She has introduced me to a wide spectrum of civil rights activity that refused to fit into a simple non-violence/violence dichotomy. “Mississippi Goddamm” is still a hard song to listen to, and it stands out in her work for its unforgiving stance on equality by any means. Songs like “I wish I Knew How it Would Feel to be Free” and “Why? (The King of Love is Dead)” show a softer side of Simone’s activism. Nevertheless, Mississippi Goddamm” continues to provoke a difficult but productive engagement with civil rights beyond non-violence.

My interest in history began well before I entered college. In fact, it began before I entered school. When I was young, my mother used to read me fairy tales while we were at my sister’s horseback-riding lessons. My favorites always had princesses and castles, knights and battles. Of course, when I got older and could read on my own, I discovered that many of the happy tales I grew up hearing were quite darker in their original versions. Italian author Giambattista Basile’s version of Sleeping Beauty, for instance, was particularly disturbing, as it involved cannibalism, rape, and death by fire. Yet, uncovering the evolution of fairy tales from dismal to Disney sparked my interest in how stories change over time and how they are adapted to different audiences. Thereafter, I wanted to learn what other stories I thought were ‘true’ that were actually different than their originals, and I wanted to learn the reasons for and context behind stories’ evolution.

This interest naturally led me into history, which is at its most basic level the stories of the past, and more recently, into public memory, which studies the ways in which we remember that past. Geographically and temporally, my scholarship has been broad; I have written on everything from geisha in nineteenth-century Japan to the National Museum of the American Indian in the early 2000s. What ties my work together, however, is my ongoing study of representations, or rather, misrepresentations. I am interested in pinpointing the origins and tracing the evolution of historical stereotypes and their implications for society today. I also fascinated by the ways in which myths and misinformation can assume such importance that they take on new meaning for people who believe in them. These studies are incredibly important for understanding American history and the ways in which some people and events have been celebrated—or alternately, silenced—in national historical narratives. With the exhibit on The Nubian Message, I hope to continue my work related to misconceptions of history, this time delving into the misconception that the civil rights movement ended in the 1960s." 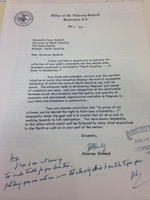 This August 1963 letter between Attorney General Robert F. Kennedy and North Carolina Governor Terry Sanford is often cited in some historical monographs as the apogee of racial progressivism and tolerance among white Southern politicians during the Civil Rights Movement. However, by applying such an interpretation to this exchange, historians ignore the voices of black activists who often protested against the respective inaction of two administrations. These issues are bound up in the broader historical questions that currently define my research: How did white, Southern men respond to the Civil Rights Movement? How did African-Americans and more militant, arch-segregationists view moderation? What political strategies, rhetoric, and tactics did these various groups employ? For example, in this case there is a gap that needs to be examined between Kennedy’s support for Sanford’s words and leadership and the results of the latter’s leadership as perceived by the African-American community both in North Carolina and at the national level as well. Instead, historians too often portray Sanford’s leadership in opposition to arch-segregationists in the state and region as whole. The hand-written note at the bottom from Kennedy is held up as evidence for this as the Attorney General expressed his hope that he did not create “too much trouble” for Sanford while he also asked the Governor to “deny” they ever knew each other. Moreover, it is insightful that Kennedy based his understanding of Sanford’s leadership off of a “collection of your public statements and the related press comments.” In response, my research attempts to contrast this “high politics” view of white, Southern moderates and their opposition to more militant segregationists with the voices and actions of African-Americans who agitated against a political and social order dominated by white men, both in the early 1960s and beyond. By emphasizing the difference between the white moderate political rhetoric that emphasized a post-Jim Crow South and the realities experienced by African-Americans at the local and level can add to historians’ understanding of the black freedom struggle after 1965. Therefore, my research seeks to understand the significance of these developments in relation to broader ideas about gender, politics, along with state and constituent power.

← Crossing the Color Line
Race & Space →
The Illusion of Inclusion