Rebecca Lowe is a second-year MA candidate in Public History. She plans to work in museums as a collections manager. Her passions for museums are historical research and artifact care. Rebecca is interested in colonial history, the American Revolution, and women's and African American history in the 20th century. Sarah Matter is a PhD student at NC State in the Public History PhD program. Much of her research is currently focused on modern United States history. Steffi King is a second-year traditional history MA student interested in studying the American South. (Fall 2014) 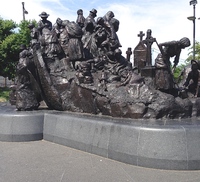 During my summer practicum in Philadelphia I embarked on weekend expeditions to museums, historic sites, and monuments throughout the city. One memorial in particular truly resonated with me, so much that I visited it three times during my stay, and each time bringing a friend along to share in the experience of the message of The Irish Memorial. This bronze statute commemorates the 150th anniversary of “The Great Hunger” (An Gorta Mor) and the migration of the Irish to America. The part landscape part boat-shaped statue is located near the water’s edge of Penn’s Landing, which is significant for the migration aspect of the memorial. In total, the memorial has four different scenes combined into one form. The base of the Irish Memorial depicts the Irish Potato famine followed by mass death. Traveling up the statue beyond the Celtic Crosses in a cramped cemetery, Irish citizens move up a hill into a “ship” with their belongings. Rounding the memorial to the right, the immigrants have arrived in America and are greeted by a man in a top hat. The Irish immigrants on the boat look almost apprehensively towards their new lives in America. As a public historian, I am intellectually stimulated by the Memorial’s success to integrate multiple narratives into one form. Usually multiple narratives exist in diverse linear and non-linear spaces like museum exhibits, and the artist achieved that practice in one bronze sculpture. After witnessing and visiting The Irish Memorial many times I am now interested in studying what other interpretive memorials are able to achieve multiple narratives and learn what affects those memorials have on the public. Finally, The Irish Memorial’s website practices community outreach by providing a digital platform for migrants to record their stories. This platform allows the public to connect their own journeys to the past, and therefore make connections through time. While the posts are curated by the websites author I believe this crossing of a memorial with an interactive exhibit is a thoughtful practice in public history. 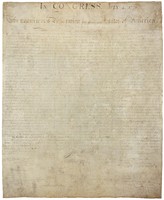 The Declaration of Independence was one of the first documents I examined and evaluated as a child and eventual historian. In elementary school, I read The Declaration of Independence: The Words that made America by Sam Fink. Fink presented the Declaration of Independence with illustrations that helped young readers grasp many of the concepts within the text. Through middle and high school, I began creating my own interpretations of the document. Because of how Fink presented the text, I also took my first steps in helping others understand and evaluate a historical document. When my younger sister was assigned to memorize the document for class, I helped her not only with root memorization but by helping her to understand the text in ways that very much resembled Fink’s book. My relationship with the Declaration of Independence reveals my two passions of historical research. My first passion, is the textual evidence of historical research. Whether I am in holding the physical document, or, in the case of the Declaration of Independence, reading a transcription, I really enjoy considering the author’s word choice and intent and how the his or her’s audience understood and reacted to the text. My second passion, really defines me as a public historian. The sharing of interpretations and possibilities of a text with others inspires me. As a public historian, I desire to make interesting and relevant primary sources available to the public and assist them in creating their own interpretations of the sources. 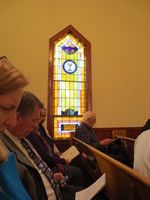 My interest in history stems from a deep, personal interest in my own family history. The stained glass window in the picture is one of eight in the sanctuary of my family church, Brown's Chapel Methodist Church, in Pittsboro, North Carolina. My family has attended and served this church since it was founded in 1846 and attended the church that it was created from for several years before that.

Alexander Thomas is my great-great-grandfather, and Thomas is my mother's maiden name. Every Sunday the members of the Thomas family who still live in the area attend Brown's Chapel and sit beside this window. Normally we take up the back two rows, but on the Sunday of the Thomas Family Reunion we take up much more room.

As a child I wondered why we always sat in the last two rows, and why my parents, aunts, uncles, and grandparents would always be worried that we may have to sit somewhere different if we were running late. I asked one Sunday when I was about five or six and learned that Alex Thomas was related to me. I began to take an interest in other things in the church related to members of my family: the Ruth Thomas Fellowship Hall, the clock donated in honor of my family, and members of my family who are buried in the cemetery dating back to before the Civil War.

I wanted to know how each of these people were related to me, where they had lived, what they had done for a living, and overall what their life had been like. I then began to wonder if other people's lives had been similar to that of my family members. Had my great-grandparents been rich or poor? Had all families lived the same kind of life as my family? All of this information mattered deeply to me but I wondered how, or if, it really mattered. What could be learned from this information that could be important to someone that was not a Thomas?

My parents began to foster my interest in history with books and patience when I wanted to read every single historical marker we ever passed. I began to pick up bits of information, and my passion for history grew. I have always been most interested in the history that I feel most directly relates to me, beginning with my family history, then Chatham County, then North Carolina, followed by the South, the United States, and countries my ancestors came from, but I believe that all history is important and wish there were time to study it all.