Activists and Authorities: The May 1970 Protests | Home

1. The Radicalization of N.C. State

2. A Chancellor's Place on a Campus in Protest

3. The Election of Cathy Sterling 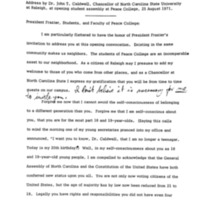 "No Escape" is an address by NC State Chancellor John Caldwell at the opening student assembly at Peace College in August 1971. It described the…

What is the role of a university? Is it to learn a trade, gain a technical degree, or expand the mind? This was a primary question activists brought to NC State’s administration at the end of the 1969-1970 school year. Our project focuses on the decisions of teachers, the chancellor’s administration, students, and Student Body President, Cathy Sterling. Using oral histories, public and private documents, and interactive programs, we hope to provide visitors with a feel for the rapid transformation that occurred in NC State’s student body during the 1960s and 1970s.

Compared to other universities during the turbulent 1960s, North Carolina State University was a quiet, business-minded college amid a sea of collegiate rebellions. A historically conservative school focusing on agriculture and engineering, NC State sailed through six years of national protest with only minor tremors. However, two events in May 1970 transformed the school upsetting the academic cart: President Richard Nixon’s announcement of Cambodia’s invasion and the shooting of four protesting Kent State students. Immediately the number of NC State students demonstrating against the war and for a different society grew exponentially.

What followed was a microcosm of the United States in Raleigh, North Carolina: formerly quiet Americans were shocked or radicalized by events around them. Some dissenters vented their anger and demanded that the school be closed, other students hoped they could finish their semester in peace, and still others asked that finals week be altered to examine what the Kent State shootings said about American society and how college students could be involved. Authorities (teachers and administrators) were similarly divided: many in the school senate vehemently opposed any change to the finals process, and some teachers, though supportive of student’s rights, believed that college was a place for work.

NC State experienced significant transformation as Vietnam veterans returned from war and entered the university as students. Unlike previous generations, students became extremely vocal in their opposition to the Vietnam War. The campus became electrified after the Kent State shooting, and the fervor of campus translated to the polls. NC State elected its first female president, an avid protester, Cathy Sterling.

How and why did the student body at NC State go from such a conservative one to such a vocal, liberal one in such a short time? How did students view their role in the university and the university's role in the nation?