Raleigh erected its first permanent YMCA building in 1913 on the corner of Wilmington and Edenton Streets. The Y sold its aging facility in 1959 and erected a new modernist structure on 1601 Hillsborough Street---mere blocks from the NCSU campus. The YMCA was an important part to the NCSU experience, as it housed a gymnasium, pool, and several meeting rooms. Its prominent role in student life prompted the Good Neighbor Council to question the YMCA's racial segregation policies. 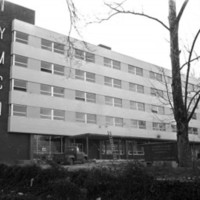