This brief editorial reacts to news that Charles Ogletree, a professor at Harvard Law School, initiated an effort to win monetary compensation for the descendants of slaves. Houpe states that although he "support[s] the objective of the suit," he also worried about how "winning a large amount of money will only cause problems among our people." Much like B. Dwight Foster's "Letter to Jefferson Davis" a few years earlier, Houpe focuses on an "apology and recognition of wrong-doing" as a crucial first step toward more amicable and equitable race relations in the United States.

I recently read an article entitled â€œLawyers aim to win reparations for descendants of slavesâ€ by Harvard Law Professor, Charles J. Ogletree. The article was about paying back the descendants of slaves for the wrong that our ancestors endured during the 244 years of legalized slavery. Ogletree believes that this is the â€œmost serious effortâ€ to compensate African-Americans since the ending of slavery.

This lawsuit is long overdue, and with Johnny Cochran, defense attorney for O.J. Simpson, Alexander J. Pires Jr., who won a $1 billion dollar settlement for black farmers who were discriminated against by the U.S. Department of Agriculture, and Richard Scruggs, who won the $368.5 billion suit for states against big tobacco will have a serious fight on their hands.

Along with monetary compensation, the team is seeking â€œfull recognition and a remedy of how slavery stigmatized, raped, murdered and exploited millions of Africans through no fault of their own.â€ Ogltree [sic.] also said that the goal of the suit is to â€œchange America.â€

I agree that African-Americans deserve some form of compensation for the centuries of illegal servitude, but Iâ€™m not sure if money is the answer to the problem. The apology and recognition of wrong-doing is definitely the way to start, but I think that winning a large amount of money will only cause problems among our people. Everyone will want a share of the settlements, because all of us are descendants of slaves; but we know that everyone wonâ€™t be paid. I also disfavor the money because money can be here today and gone tomorrow.

Iâ€™d rather see compensation in the form of reinstating affirmative action in states, such as California and Texas and preventing it from being abolished in the rest of the states. I think continuing to provide our people with opportunities will better serve us than money. Itâ€™s like the saying â€œgive a man a fish and feed him for a day, but teach him to fish and feed him for a life-time.â€ Nevertheless, I support the objective of the suit, which is to pay us back for the sufferings endured by our ancestors. 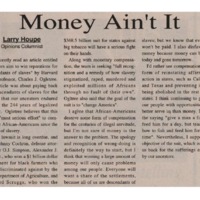