This collection contains digitized images of articles from The Nubian Message, North Carolina State University's African American student newspaper. The Nubian Message was established in 1992 after students protested against racial bias in the Technician, NCSU's original student newspaper. The collection also contains digitized images of the Technician articles that precipitated the student protests. Articles were selected for inclusion in this collection based on their relevance to the project, "The Illusion of Inclusion: Creating Space and Crafting Identity in The Nubian Message, 1990-2014." 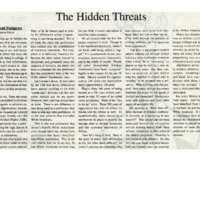 A lot of things go on behind the scenes that many of us are not aware of. These are the things that are most threatening to our well-being, the things that affect our lives the most. Especially being in college, if you donâ€™t seek to find…

The Wake Up Call 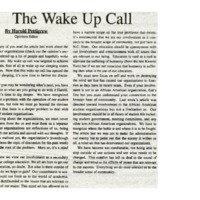 A lot of you may be wondering whatâ€™s next, you have our attention so what are you going to do with it Harold. So, now itâ€™s time to dig deeper. We have recognized that there is a problem with the operation of our student organizations, but now we… 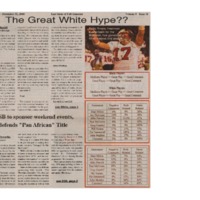 The white quarterback is the most heralded player in professional and collegiate football because of, among many things, unfair coverage by television and print media, a study conducted by â€œThe Nubian Messageâ€ revealed.

View the items in The Illusion of Inclusion