This short, editorial staff piece in the Technician on March of 1991, set off a firestorm of back-and-forth letters to the editor from different African American students at NCSU debating whether they preferred the use of the term "African-American" or "black." The piece goes through a short history of the use of both terms, as well as other words to describe African Americans and references the director of the African-American cultural center in its discussion of terminology. The article ends by saying that the Technician would generally use the term "black" as a physical descriptor and "African-American" in cultural contexts and then asks for feedback from the general student population. The letters in response show internal divides within the African American community on campus itself.

Technician is deciding on the journalistic use of the term black as opposed to the term African-American.

The debate stems from the fact that there seems to be a growing trend toward using African-American. However, this term is not as accurate as black in most cases. Black is a descriptive adjective that is short, conveys the most information in the least amount of time and space, and is quickly understood by readers

Black should also be considered parallel to white, however, as we are all aware, there is still too much prejudice for this to be completely true. But we can hope it will improve. An important point to remember is that all Africans are not black and not all blacks are from Africa.

The Associated Press Stylebook and Libel Manual suggests that black is acceptable in all references for Negro.

In certain cultural contexts though, African-American is usually more accurate and therefore should be used

In discussing any heritage, members of various cultures hyphenate their ancestral association to link it to their present association. For instance, when someone comes to America from Dublin, he is called Irish-American. And then his children, assuming they stay in America, are called American. The problem lies in the fact that American blacks have been severed from their cultures whereas other Americans have always had a land-based heritage.

Dr. Moses, director of the African-American Cultural Center, said the reason blacks have moved toward calling themselves African-American is that it creates more of a world perspective. It also shows people's evolving conscience and offers some sense of healing, she said.

So is it a changing thing?

Dr. Moses considers herself African-American while Larry Campbell, assistant director of the University Student Center considers himself black. An informal poll of NCSU students showed that most blacks do not care whether they are classified as black or African-American.

In conclusion, Technician is going to make a stylistic move to use black when it is necessary as a description and African-American only in cultural contexts or when requested to do so by those involved in a specific article.

However, it is important to remember that when it is unnecessary to distinguish between whites and blacks, there should be no reference to race. If you want to be a part of history, please write to the opinion editor of Technician and let your feelings be known

African-American or black. Or do you not care? 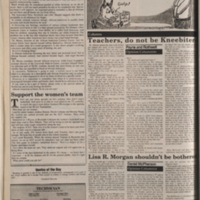