This article highlights the stakes of the racial debate on NC State's campus in the early 1990s. Although NC State is not known as a historically black college or university, in 1991, NC State received more SAT scores and applications from African American students than any other non-HBCU in the country. The high number of black applicants and enrollees on campus created a significant African American population. At the same time, NCSU's largely white, rural, southern, and conservative student body existed somewhat uneasily with this heavy influx of African American students. We must understand campus debates about affirmative action, race, identity, post-racialism, and the founding of the Nubian Message within this context of rising African American enrollees at the university.

More African-American high school seniors send their SAT scores to N.C. State than to any other traditionally white college in the nation.

NCSU appeared seventh in a list of 15, ranked behind six predominantly black universities, such as Howard University and N.C. A&T State University.

The list came from the College Board and showed the rate that schools received SAT scores from African American high school seniors in the class of 1990. African-Americans chose NCSU at a rate of 4.9 percent, compared to 13.9 percent for Howard University and 6.0 percent for N.C. A&T. Two other UNC System schools, N.C. Central (4.6 percent) and UNC-Chapel Hill (4.0 percent) ranked in the top 15.

Nathan Simms, UNC-system vice president for student services and special programs pointed to the reputation of academic excellence and relatively low tuition of campuses in the UNC system to explain its strong showing.

He said that scholarships and financial aid are the primary factors for students in choosing a college and that NCSU uses both of them to recruit minorities actively.

Among other NCSU offerings that attract students are tutorial programs, mentoring programs, extra-curricular activities and a recruiting program that is "open and honest" about racism, Dixon said.

"In no way do we try to compare schools," said Dixon, explaining that NCSU recruiters provide information and let students and their parents compare

Dixon said that NCSU's approach is to point out that "N.C. State is a reflection of society" and, as racism exists in society, it exists at NCSU.

NCSU has 73 African American full-time faculty members out of a total of 1,623, according to Sophronia Tucker, social research assistant II in the provost office

Anona Smith, director of student services for the college of education and psychology is involved in recruiting black students and said that racism did not seem as important an issue for some African American students as the number of academic majors

Many African-American students are used to being in predominantly white settings so they focus on other concerns, Smith said.

Smith was surprised that NCSU ranked so high in the list since "N.C. State is not well-known in black communities."

But Smith said, because NCSU has so many support programs, organizations, and people working to develop a multi-cultural community, minority students go home and tell their friends about it. 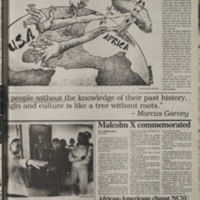 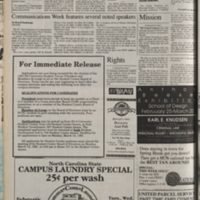