The following document is an excerpt from an editorial in The Nubian Message, North Carolina State University's African-American student newspaper, which was first published on November 30, 1992.

The "Darkchild" mystery column first appeared in Volume 8 of the Message, or the 2000-2001 academic year. In this editorial, the mystery columnist denounces an article that appeared in the Technician discussing the academic performance of members of predominantly- white Greek letter organizations. Darkchild points out the fact that the author of the article ignores any data from historically-African American fraternities and sororities. For the mystery columnist, the central issue is not just the "one-sided slant from which the article was written," but also the broader worldview that dismisses black institutions and allows whiteness to remain the implicit norm in racial categorization.

Iâ€™m not a Greek, but even I did a triple take following last Tuesdayâ€™s Technician article about sorority and fraternity GPAâ€™s at N.C. State. Perhaps it is because I have a predisposition to read between even the invisible lines, having already spent three years at N.C. State; but as I read, I couldnâ€™t help but notice the extremely one-sided slant from which the article was written.

Take for instance, the fact that no representatives from African-American Greek-letter organizations are mentioned anywhere in the article. Surely, a member of the National Pan-Hellenic Council (NPHC) could have adequately and intelligently represented the Council as legitimate students with active interests in academic and service excellence. Also mentioned in the article is the new policy implemented under the Inter-Fraternity Council, a policy requiring freshmen rush hopefuls to meet an Academic Index requirement of at least 2.5. This is described as an attempt to prevent freshmen who run the risk of performing at low academic standards from participation in rush until satisfactory academic progress is displayed. Noticeably absent from this article however, is the NPHC guideline that prohibits freshmen students from pledging a Greek organization until matriculation to a sophomore standing as well as a minimum GPA requirement. I donâ€™t know; maybe there is a perfectly legitimate explanation for why these facts are mysteriously omitted from the Technician article. It is possible that EVERY single member of NPHC or the traditionally black, Greek-letter organizations decided to go home right before the Technician story deadline. Or perhaps the articleâ€™s writer, Ms. Millen, has a violent allergic reaction to the perfume worn by the Coordinator of African American Student Affairs, who incidentally, is also the faculty advisor for NPHC. Hey, Iâ€™m trying to give the writer the benefit of the doubt because after the next paragraph or two, sheâ€™s going to need it. 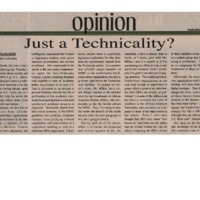