Responding to a column in Technician, African-American students protested by burning copies of the newspaper on the Brickyard.

The Rev. Martin Luther King Jr.’s strongest weapon in our fight for civil rights were mere words and the freedom he exercised when he spoke those words to an assembly. Yes, he was arrested time and again for exercising that right, but it was his words that incited a nation of people to peacefully protest. The sheer number of people he reached with his words were the determining factor in achieving equality for all minorities, for those in power could no longer contain the masses that flocked to hear King’s words. They could no longer deny the inalienable right to speak freely. In the end, they could no longer deny any person their civil rights. 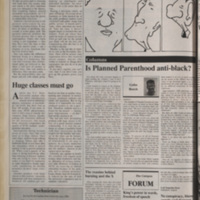