"Racism Not Just White Against Black"

"Racism Not Just White Against Black"

This article by Claxton Graham exposes the diversity within the African American community at NCSU over issues of racial equality in the 1990s. Graham feels alienated by many African Americans who express more overt racial pride and, like James O'Keefe, is uncomfortable with the popularity of racial pride/black power shirts. He espouses a traditional, but conservative African-American view that African Americans need to show that they are worthy of the privileges of access in order to truly enjoy racial integration and gain respect as a truly equal race and places most or all of the blame for continued racial inequities on African Americans themselves.

If I didn't know any better, I would swear that my friend, whom I'll refer to as "John," was the long-lost older brother my parents never bothered to tell me about. The fact that we have so much in common and look so much alike is absolutely frightening.

Though we don't always agree on our favorite teams or who's going to win the big games, we're both avid sports fans. We also sport senses of humor about as dry as Death Valley. It takes about five minutes for the laughs to catch up with the punch line. We even like a lot of the same musical talent, like Phil Collins, Hall & Oates and Level 42

And we've been fortunate enough to break down some hefty barriers and build some very strong, very special relationships with people who have similar ideals, values, and tastes. That link has caused both me and John problems over the course of our lives, and sadly enough, they’ve only intensified since we’ve come to N.C. State. You see, John and I are black. many of our friends are white

Considering that black Americans have battled hypocrisy, stereotyping and prejudice for over two centuries, it is truly amazing how those same criteria determine how blacks look at their own people. If you don’t wear the “right” clothes, listen to the “right” music or hang around the “right” people, you are basically shunned by and subject to scorn and ridicule from the same people who fight tooth and nail against such judgments from their white counterparts

More than once, John and I have been tagged as white guys trapped in black guys’ bodies, or more simply “wanna bees,” just because we don’t think like most blacks around here. Some people have actually been bold to ask us why wedon’t have as many black friends or aren’t just as involved in black activities. A few even had the nerve to suggest we need more brothers in our lives

The problems don’t stop there. When the legislation was enacted to helped us gain our freedom during the 1950s and 1960s, no one could foresee that a precarious double standard was being established

No one gripes when a person wears a T-shirt with a catchy little slogan like “Black by popular demand,” but if a white person were to wear a comparable item, NAACP representatives would descend on this place like bats out of Burlington. Sure, it’s okay for us blacks to strut our stuff like prideful peacocks, but a white person doing the same thing would be immediately branded as a racist redneck unworthy of his pitiful, ignorant life

Wait a minute, there’s more! It seems like the white man for some reason, is responsible for all the black man’s woes. There are a lot of people out there who are content to blame “The Man” for everything--drug use, single mothers, gang violence, etc.--but unwilling to do anything about it. It saddens and angers me to see that my own people can be that two-faced. It’s almost like we are taking advantage of freedoms people like Sojourner Truth, Frederick Douglass and Martin Luther King Jr., fought so hard, and even died, for. We enjoy the benefits and privileges of being able to go to what was once a whites-only school, but we aren’t willing to shoulder the responsibilities that go along with them.

Before we black Americans, regardless of our station in life, can ever expect to receive respect, understanding and fairness from our white brothers and sisters, we must first learn to respect and understand ourselves.

It means taking a few calculated risks to build lasting relationships across cultural and racial lines. And, above all, it means recognizing that all our own people are not the same. Just because someone doesn’t fit into a cookie-cutter, stereotypical mold doesn’t mean that person should be snubbed or blacklisted. In fact, that same person might have something valuable or important to share with you

Blacks have come a long way during the course of history. We now have the power to provide the world with capable leaders in all fields. We have an active voice in the daily affairs of our world. We have the opportunity to broaden the scope of our knowledge knowledge and leave behind a rich legacy for future generations.

Yet if we cannot put our heads together and our differences aside, more than 200 years of struggles and millions of deaths will be needlessly wasted, and the black American will find himself in a hole only Judgment Day will be bold enough to pluck him from. 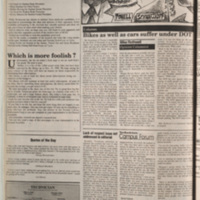