The 1975 Annual Report of the School of Agriculture and Life Sciences summarizes the year's changes in agriculture; changes in the school's curriculum, buildings, and courses; Extension; and research. The 1975 report reviewed the creation of North Carolina State University as a land-grant college, the changes in agriculture over a two hundred year period. Pages 16-17 of the report discusses in depth women on campus. There is a chart showing the percentage of females in undergraduate enrollment, graduate enrollment, and Agricultural Institute enrollment versus the total. This chart reveals a jump in the enrollment of females in the Ag Institute in 1971, 1973, and 1975. The School of Agriculture welcomed the influx of women, and concluded that women were interested in a variety of curricular choices whether in agriculture or liberal arts.

School of Agriculture and Life Sciences

p. 16:
"The traditional almost exclusively male campus of North Carolina State University lives only in memory. And most students would agree that this is a desirable change.

It is generally accepted that large numbers of young women will enroll in the campus offering in liberal arts and education. Not quite so well known is the fact that nearly one of three students enrolled in the School of Agriculture and Life Sciences are women, and women who are interested in a wide variety of curricular choices.

Overall enrollment figures for undergraduate, graduate and Agricultural Institute students have trended upward in all classifications. Nevertheless, significant gains in the actual number of women enrolled and their percentage vs. the total School population show increases in the four-year period. (See Table 1.)

The data indicate that as recently as 1971 only one in five of the total student population was female, even though the undergraduate enrollment had already passed the one to four ratio.

p. 16: History square:
"At the beginning, two courses of study were open to A&M College students - agriculture and mechanics. The agriculture course included general agriculture, horticulture, arboriculture, botany, chemistry, history, English, and bookkeeping. The agricultural work, including manual labor, demonstration and observation work, led to the degree of Bachelor of Science in Agriculture. During the year of 1893-94, provision was made for special students to attend the regular classes, and a sub-freshman class was organized. The latter was to afford special instruction to those students who were unable to enter the freshman class, and who nevertheless desired a technical education.

About 1895 the College began to offer short courses in agriculture and these were later extended to include mechanic arts. These courses then and since have been of immeasurable value to adult farmers and engineers throughout the State." 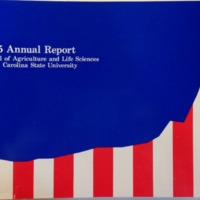