In this case, District Judge Johnson Jay Hayes ruled that the UNC law school did not have to admit the defendents because the law school established for African Americans at the North Carolina College for Negros could provide them with an adequate education. This decision was reversed by the Supreme Court in 1951.

This action was originally commenced by Harold T. Epps and Robert Davis Glass seeking an injunction against defendants for refusing to admit them to the University of North Carolina Law School because of their race and color. During the pendency of the action Floyd B. McKissick, Soloman Revis, Harvey Beech, Walter Nevin, Perry V. Giliard and James Lassiter were permitted to intervene as parties plaintiff and when the case was called for trial J. Kenneth Lee was likewise permitted to intervene. However, Epps has graduated from the school of law from the North Carolina College at Durham and therefore was permitted to withdraw from the case at his request and intervenors Robert Glass, Harvey Beech, Walter Nevin and Perry B. Giliard were also permitted to withdraw. The remaining intervenors, McKissick, Revis, Lassiter and Lee possess the requisite academic requirements for admission to the Law School at the University of North Carolina where they applied for admission and were refused by reason of their race and color and for the reason that North Carolina had provided a Law School for Negroes at the North Carolina College where they had applied and had been admitted as law students. They are citizens and residents of the state and are prosecuting this action as a class action in their behalf and others similarly situated.

The present facilities of the two law schools, in the way of housing, are inadequate but funds have been appropriated and plans are being executed for radical changes at both institutions. At the University Law School an addition is being made to its present Law Building, while at the College Law School the present Library building is being converted into a Law Building. When these changes are completed during the year the housing facilities at each of the institutions will be substantially equal for the number of students likely to attend the institutions. So 329*329 far as the present housing facilities are concerned the Law Building at the University is severely overcrowded and in some instances the class enrollment is as high as 120. At the College Law School class rooms are large enough to accommodate far more students than the school has, although the building is a wooden structure.

The plaintiffs virtually concede that the College Law School is adequate to afford the plaintiffs legal training; to qualify them to pass the North Carolina Board of Bar Examiners and to practice law but it is their contention that the University Law School is superior in its facilities and in the opportunities for a legal education provided for white students to the facilities and opportunities afforded at the College Law School.

The inferiorities were testified to by the Dean of the Harvard Law School, a Professor from the Chicago University and a Professor from Howard University at Washington, D. C. The equality of opportunity for a legal education was testified to by Mr. Harvey, Counsel for the Section of the American Bar Association on Legal Education who was Dean of Temple University Law School for approximately 17 years and of the law school of the University of Oklahoma until he entered the practice of law; by ex-Judge Spears and former professor of Duke University Law School; Dr. Lake and Professor Soule of the Wake Forest Law School; ex-Justice of the Supreme Court Varsar and President of the Board of Bar Examiners since 1933 and other members of the bar.

There are certain differences of facilities existing at the University Law School not present at the College Law School but such disparities as do exist are either overcome or equalized by advantages which the plaintiffs would enjoy at the College Law School. North Carolina College was taken over from Dr. Shepard in 1925 at which time it was made a state normal with an enrollment of 100 as late as 1926 but its growth has been remarkable and its enrollment last year was 1300. It is open to boys and girls and is a member of recognized Associations of Colleges and Universities. The legislature of North Carolina at its last session appropriated for buildings and improvements on the campus in excess of $4,000,000 and its appropriations for its annual operating budget is in excess of $1,000,000.

The evidence disclosed that the Negro lawyers of the state derive their practice from members of their race and there was no evidence to show that any member of their race ever represented a white client. In the opinion of some of the witnesses the advantages which the plaintiffs would derive from attending the College Law School, by reason of their contacts and acquaintances of the members of their race attending the College from all parts of the state, would far exceed any advantages which might accrue to them if they attended the Law School at the University of North Carolina. It also appears that they are receiving individual attention and instruction as students at the College Law School and 330*330 that it is an efficient law school, staffed by an efficient faculty, with an excellent library and that the work of the law school is not one of anticipation but it is securely established and has been in operation for 10 years.

The situation with regard to legal training offered to Negroes in North Carolina is quite different from the conditions which prevail in the Texas case, Sweatt v. Painter, 339 U.S. 629, 70 S.Ct. 848, the Oklahoma case, Sipuel v. Board of Regents, 332 U.S. 631, 68 S.Ct. 299, 92 L.Ed. 247 or the Missouri case, State of Missouri ex rel. Gaines v. Canada, 305 U.S. 337, 59 S.Ct. 232, 83 L.Ed. 208. Following the Gaines case, the legislature of North Carolina established the College School of Law without a law suit or the threat of a law suit and it has proceeded with the development of the school of law with the fixed purpose to provide equal facilities for the Negroes with those furnished to the white students at the University of North Carolina.

In the trial of this case there were many facts testified to by witnesses which were contrary to theories and expectations. There is no segregation in the law schools of New York and Pennsylvania but part of the students at the College Law School are from these states, manifestly by choice. Twelve of the 28 students are from out of North Carolina.

The Dean and the members of the faculty with the exception of Professor McCall and Professor Bryson, the librarian and his assistants are Negroes. One of them is a graduate of College Law School. There is ample testimony to show that the faculty is thoroughly capable and that the teaching at the institution shows that it keeps pace with the work done at the University Law School and the other law schools of the state.

Its applicants for admission to the bar are as successful in proportion to their number as the success of those from the University Law School or the other law schools of the state. Although it is stipulated that the population of the state is 74% white the evidence discloses that this percentage does not tally with the number of witnesses and litigants in the Negro race.

There is no evidence before the court to show that a Negro lawyer attending the University of North Carolina would enjoy a higher standing with the Judges, and lawyers, and litigants, and jurors and witnesses than he would enjoy if he attended the College Law School. I would not think that it would make the slightest difference with a judge who is fit to sit on the bench, nor should it have any appreciable effect on the jurors who are sworn to do their duty according to the evidence in the case. It is the view of the plaintiff's expert witnesses that there can be no equality of opportunity if segregation exists. This opinion is contradicted by the testimony of the witnesses for the defendants and the courts throughout the country have very generally held that equality of opportunity in education can exist where segregation is practiced.

In the case of Gong Lum v. Rice, 275 U.S. 78, 48 S.Ct. 91, 93, 72 L.Ed. 172, a Chinese citizen of Mississippi sued to compel the school authorities to admit his child to the white school but the law of that state required the children of the colored races to attend the colored schools and prohibited them from attending the white schools. The United States Supreme Court denied relief and among other things said: "The question here is whether a Chinese citizen of the United States is denied equal protection of the laws when he is classed among the colored races and furnished facilities for education equal to that offered to all, whether white, brown, yellow, or black. Were this a new question, it would call for very full argument and consideration; but we think that it is the same 331*331 question which has been many times decided to be within the constitutional power of the state Legislature to settle, without intervention of the federal courts under the federal Constitution." Segregation is provided for under the constitution of North Carolina in relation to its public schools. Article 9, Section 2 provides: "And the children of the white race and the children of the colored race shall be taught in separate public schools; but there shall be no discrimination in favor of, or to the prejudice of, either race."

The Supreme Court of North Carolina has held that the legislature has the power to provide for segregation, and to prohibit the attendance of children with any Negro blood, however remote, from attending schools for white children. Johnson v. Board of Education, 166 N.C. 468, 82 S.E. 832, L.R.A.1915A, 828. Moreover, marriages between white persons and Negroes are prohibited by Article 14, Section 8.

The state in providing facilities for higher education for its citizens has established a system of colleges for the whites and separate colleges for the Negroes, the institutions for each race being widely distributed over the state for the convenience of its citizens. There are five such institutions for Negroes and the legislature in its last session appropriated a sum in excess of $10,000,000 for buildings at these institutions. The state institutions are established and maintained out of the tax funds of the state. It has been a long and strenuous effort to build up sentiment in North Carolina for the cultural development of its citizens, but progress is being made and in this progress the best people of this state have a right to rejoice.

The phenomenal growth of North Carolina College over a period of 25 years demonstrates the rapidity of the response by the Negroes to educational opportunities. It is likewise commendable on the part of the legislature to appropriate funds for permanent buildings at these various institutions for the Negroes.

The undertaking on the part of the state of North Carolina to provide legal education for its white citizens makes it mandatory for the state to admit Negroes to these institutions or to provide equal facilities in a separate school for Negroes. This has been undertaken by the state in the establishment of the Law School at North Carolina College. 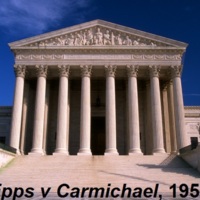