In this November 5, 1973 Technician opinion article, the Technician criticized the Society of Afro-American Culture for holding a closed door meeting with university administrators following the November 1 Chancellor's Liaison Committee meeting. In the article, Technician declared SAAC had "no more right" to claim use of the Print Shop than any other campus organization.

Chancellor Caldwell’s private meeting with Don Bell and several SAAC members Thursday afternoon as this Liaison Committee meeting does nothing to improve the black-white relationship on this campus.

Bell’s refusal to speak up during the Liaison meeting, attended by students and administrators alike, undermines the entire concept of such a gathering where students and University officials can discuss problems concerning the campus community. And whether or not Bell realizes it, some of the black students’ grievances do affect the campus community. There is also a question of SAAC’s desire for publicity for those grievances. Bell himself has had little to say about his meeting with administrators, which would lead one to believe that he does not want publicity. Then why did the SAAC members barge in during the Liaison meeting? There are more opportune times to visit Chancellor Caldwell. What they did was sure to attract attention.

Eventually, SAAC’s headquarters in the King Building, will be torn down to make way for the expansion of the Design School. But other groups, such as the YMCA, APO, and the State Sentinel make their homes in the King Building and they too will have to find additional space elsewhere when the time comes.

Therefore, SAAC’s request of the Print Shop is all well and good, but they have no more right to it than the other organizations mentioned. The Administration has an obligation to find space for all such displaced organizations. Hopefully, accommodations can be made for all of them.

Another question is that of a joining together of Pan African Week and All Campus Weekend. Although only a suggestion at this point, such an idea deserves consideration simply because it could lead to an overall healthier atmosphere at State.

However, the black students to have a valid argument in that Pan African is more of a cultural event, whereas All Campus is strictly social in nature. Still, a compromise is possible, but only if the two parties sit down and discuss it. Apparently, the black student leadership feels discussion is out of the question.

SAAC’s way of handling these grievances smacks of segregation; Bell’s refusal to consult other student leaders cannot be interpreted in any other way. His attitude seems to be one of ‘Leave us alone and we’ll leave you alone.’ But there is no place for such sentiment here. We’re all in this together. 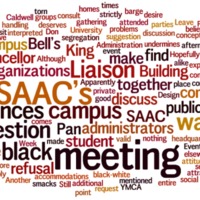