The Nubian Message, North Carolina State University's African American student newspaper, was first published on November 30, 1992. In this March 28, 1996 article, Health Editor Tawana Myles discussed the prevalence of acquaintance rape on college campuses. Citing official statistics, Myles stated that one in four women would be the victim of actual or attempted rape while in college, most often at the hands of someone they knew. She then described ways that women could recognize potential sexual predators and protect themselves from sexual assault. Myles emphasized that both men and women have the responsibility to prevent acquaintance rape -- women by avoiding potentially compromising situations and men by respecting a woman's right to say "no."

This article is representative of The Nubian Message's robust coverage of student-related health issues, including HIV/AIDS, diabetes, sexually transmitted diseases, and weight. The article also represents the paper's ample coverage of women's issues. By listing ways that women can protect against acquaintance rape, for instance, the article empowered female readers to take control of potentially threatening situations rather than become rape victims.

One in four women in colleges or universities today has been a victim of actual or attempted rape. Surprisingly, 90 percent of all college rapes occur between two people who know one another to some extent. Unfortunately, 90 percent of rape victims do not even report the crime - 1 in 3, in fact, do not tell anyone at all.

Men who rape usually use several different tactics to get a woman into a vulnerable situation. Sexual exploitation is a major tactic in cases of acquaintance rape. Females often experience emotional, psychological, or economic pressures from the male. Academic sexual harassment is sometimes involved between students and persons in positions of authority.

Another tactic utilized frequently is force. Threats, or physical violence are more common among men who feel threatened themselves or have a need to show power. This tactic is usually more aggressive, and for that reason, more dangerous. Males who use this tactic usually inflict pain on the female.

There are several safety tips that can be followed to prevent a woman from placing herself in a vulnerable position that could lead to rape. Women should avoid excessive alcohol consumption.

This reduces self-control and awareness. When out on a date, arrange to have another form of transportation available in case you cannot rely on the date. Furthermore, never go to secluded, unfamiliar places. This allows the date to take complete advantage of a woman because no one is around.

There are sometimes warning signals that are common among offenders. The offender usually becomes selfish and aggressive when he does not get what he wants. He may show signs of carelessness towards others' feelings, and ignores the victim's desires, needs, and wants.

He constantly makes the victim feel guilty or confused if she does not want to go along with what he wants, specifically sexually. Signs like these usually will not show until the second or third date.

Both men and women have certain rights and responsibilities when it comes to dating. For women, deciding upon and letting the partner know what the sexual limits are is a must in every new relationship. Another responsibility is becoming aware and staying alert of the partner's behavior if there is any suspicion of him being a potential rape offender.

A woman should never put herself in a position to be raped. This is a major responsibility because it can mean the difference between a safe date, and a possible rape. Men should never demand an explanation if a woman says "no". Respect for others, not sex, should be used as a tool to improve one's image. Using pressure and coercion to force sexual contact is always going to be rape - no exceptions.

There are several resources on campus for more information on acquaintance rape. The first step that a woman should take to protect herself is to gain knowledge and awareness about this crime. N.C. State Student Health Service (737-2564), NCSU Wolfpack Teletip (737-3737), or the NCSU Counseling Center (737-2563) are a few of the many resources to find out more on acquaintance rape. 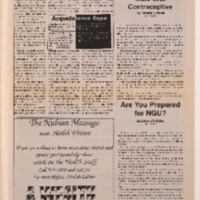