"An Apology to our Loyal Readers"

"An Apology to our Loyal Readers"

The Nubian Message, North Carolina State University's African American student newspaper, was first published on November 30, 1992. In this editorial, published in the October 14, 1993 issue, newspaper staff members expressed their disappointment that NCSU had not hired an African American head coach for any campus athletic team. They criticized University administration for outwardly promoting multiculturalism and diversity, but failing to uphold these ideals in practice. Provocatively, staff members also compared the current athletic situation, in which many African American student athletes play under a few white coaches, to American slavery, where millions of African Americans were subjected to physical and mental abuse at the hands of a few white slaveholders. Ending the article on an ironic tone, staff members claimed that they would "wait patiently for the day when we can write about an Afrikan-American Head Coach at N.C. State," but "we will not be holding our breath."

An Apology to our Loyal Readers:

We intended to fill this space with an article that highlighted the accomplishments and career of an Afrikan-American man or woman who is (or was) the Head Coach of an athletic team at N.C. State. Unfortunately, despite the all [sic] the noise this university makes about racial equality, multiculturalism and diversity, NCSU hasn't been able to find an Afrikan-American who is worthy and/or capable of heading one its [sic] sports squads (although it obviously has no problem recruiting a large number of Afrikan-American athletes). Does a slave-master relationship exist in NCSU Athletics? We'll let you decide. Until then, no matter how long it takes, we'll wait patiently for the day when we can write about an Afrikan-American Head Coach at N.C. State. (but we will not be holding our breath) 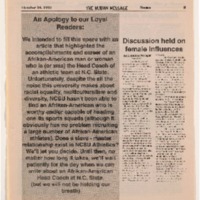 The Nubian Message editorial staff, “"An Apology to our Loyal Readers",” The State of History, accessed July 5, 2022, https://soh.omeka.chass.ncsu.edu/items/show/579.