Why African-Americans MUST Vote on November 7

Why African-Americans MUST Vote on November 7

The following excerpt is from an editorial in The Nubian Message, North Carolina State University's African-American student newspaper, which was first published on November 30, 1992.

This editorial attempts to correct the neoconservative view of African-American history that promotes the Republican Party as the consistent friend and supporter of the black community. Darkchild takes aim at the Reagan "regime" for its economic and foreign policies, including Colin Powell's role in the administration. Moreover, the mystery columnist states their belief that the GOP since Reagan wanted nothing to do with the political causes of African-Americans preferring to support the policies that favored "the privileged few." Although Darkchild criticizes Clinton and Gore briefly, they seem to endorse them despite this disillusionment. As a result, this editorial demonstrates that for many writers in the Message, despite their disgust with leaders, both on campus and in Washington D.C., who spoke eloquently but refused to take action to advance the cause of African-Americans, these black students remained committed to reforming American society through political engagement.

The latest breed of black Republicans are quick to document the Democractic Partyâ€™s historical negligence of the African-American people. Obvious history-enthusiasts they proclaim the Republican Partyâ€™s strong commitment to minority issues, happily representing General Colin Powellâ€™s many military accomplishments and personal successes as typical of blacks under Reaganâ€™s regime, I mean presidency.

These same brothers and sisters that are eager to give these types of history lessons fail to recount how Reagan-omics crippled our communities. They became so weakened in fact, that when the CIA dumped their truckloads of weapons and crack into the heart of a gang-ravaged Los Angeles, his wife chose that opportunity to conveniently declare her â€œwar on drugs.â€ And while we obediently killed ourselves and each other in the streets, Mr. Reagan was busy telling Mr. Gorbachev to put down HIS weapons.

Following his reign were four years of us wading through the Bushes, enslaved again and awaiting our Black Moses. Well, Will Smith is probably the closest weâ€™ll ever get to a black president because heâ€™s the only brother with enough money to keep Susie Sunshineâ€™s Daddy happily golfing with the rifle unloaded. However, for eight years, we have made great strides towards our unseen â€œpromised landâ€ as President Clinton has rallied to our aid in key political decisions. Weâ€™ve had more appointments during Clintonâ€™s presidency than cousin Pookie had at the Korean nail salon all last year. Deep down inside, a small part of us all knows that Bill Clinton has some â€œsoulâ€ in him because the man simply has too much charisma (and nerve).

Think about it. Amidst the constant threats of war in the Middle East, his baby-mama drama, and the constant criticisms of an uninspired Congress, he managed to run the country and run his game. Meanwhile, we are experiencing the greatest economic prosperity in modern times. I wonder why all of those history fanatics within the Republican Party cannot seem to recall how excellent they were living for these past eight years. Or how during his public witch trial (impeachment), his staunchest critics were unmasked as adulterers and philanderers themselves. Clinton stood up against South Carolina and all of its Klansmen while the Republicans waited in the Bush-es for the smoke to clear. Whatever your thoughts are about the man and his ethical fiber, there is no denying his effectiveness as president. And if he could run again, everyone knows that heâ€™d be president for another term.

Letâ€™s face it. Al Gore leaves much to be desired. He claims credit for inventing the internet when in fact, Phillip Engweali, a Nigerian with U.S. citizenship wrote the program for the first web site. Gore avoids key issues concerning race relations in this country, but he vehemently opposed South Carolinaâ€™s â€œtraditionâ€ of oppression and pride in the form of a racist flag. Sadly, we are currently living in a political climate in which we must choose between the lesser of two evils. Voting for Nader and his Green Party simply takes away crucial votes needed to ensure some semblance of key representation in Washington. See, George W. Bush has basically ignored our vote; he campaigns to the people he is determined to represent: the privileged few. Weâ€™re all intelligent enough to see through the well-choreographed â€œdown by the riversideâ€ pulpit sermons that Gore has delivered in recent weeks, but at least he is pretending to care. Everyone is sleeping on the college vote as well, particularly the black college studentsâ€™ vote. There is more than just a few empty seats on the local board at stake here. These are our lives. I donâ€™t even want you to think about this too long. This is not a suggestion or a plea. No more â€œcalls to arms.â€ Go out and vote. And take a friend. 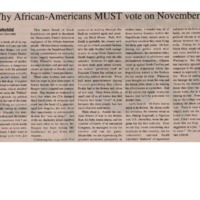 Darkchild, Opinion Columnist, “Why African-Americans MUST Vote on November 7,” The State of History, accessed June 30, 2022, https://soh.omeka.chass.ncsu.edu/items/show/33232.