The article appeared in the Nubian Message, North Carolina State University's African-American student newspaper, which was first published on November 30, 1992. The following front page details the results of the April 2000 N.C. State Student Government elections. As the title indicates, the preferred candidates of the African-American Student Advisory Council (AASAC) won four key student government positions including: Student Body President, Student Center President, Student Treasurer, and the President of the Student Senate. Of particular interest in terms of the history of the Message is that Harold Pettigrew, a former writer and editor for the paper, won the election for SGA president. 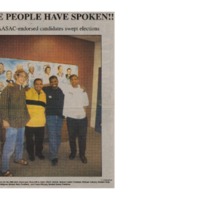