Oral history narrated by Mary Kannon DeMolli at her home on February 9, 2014. Mary DeMolli discusses her Lebanese and Catholic upbringing in Fayetteville, North Carolina, in the 1940s and 1950s.

Benter:
You kind of mentioned this before, but growing up in the South did you face any kind of discrimination due to your religion or skin tone or anything like that?

DeMolli:
Well, we had it for both. We had it for being Lebanese, foreigner, and then, because people didn't want their kids playing with me and you know? I laugh because, this may not be important, but a lot of the family, and this reminds me of the Italians because I was married to an Italian - the southern Italians versus the northern Italians - and this also has to do with ethnic groups in general. The darker you are, there's more prejudice. It's a strange thing. I had a black anchor at UNC TV when I worked, she used to say the first thing my mother said about my child was "Thank god he's light," and I said to her, you're kidding me. And she goes, no, Mary, you think your ethnic group is the only one that has class distinction? I said no, I guess, I never, you never really think about it.

But I know that my sister, my twin brother, and my sister and my oldest brother, they were very like the Kannan side of the family - very very dark complexion, very olive skin, almost black eyes, black black hair. Mine is died as you can see. That's my twin, taken from a photograph, but they all, everybody just couldn't believe that I was their sister! You see, I was like the Zehren side, some had the blue eyes and some had brown, some had sandy hair and some had dark hair, but it was never like the Kannan side of the family. So it was just the - it was the distinction there at school - you're Lebanese, theyâ€™re foreigners. But they had worse names then that. I mean, I don't want that to be on there (laugh). But they would tease my brother, because he was a big basketball and football player. Both my brothers played basketball and they both got awards but the kids back then, even at the Catholic school, would call them sand-niggers and tent-makers and it was awful.
But you know we didn't take it like, I mean, we'd give it as good as we got. You couldn't beat up several of your friends because they all did things like that. I have a friend who is Japanese-American and he said to me "Why do you say you Jap?" and I say that's because when we were growing up, everybody, I mean, if you mentioned Pearl Harbor, please. I felt bad for the Japanese-Americans, but you know, when you're young, none of those things that you feel now bothered you then. You went to school and everybody said or did the same thing. So it was bad, really, when you think about it now as an adult. Why didn't somebody knock us in the head for saying something like that? The Japanese in school, they did the same thing. We just, I don't know how to say it. I think when you're young, you do stupid things and you don't realize how stupid they are until you're an adult, you know. I think the thing that I really remember about that is one of the guys when we had a big reunion. And see there was only about a hundred kids at cathedral and you knew everybody in school - it wasn't just that you knew your class. And I had one of the largest classes at cathedral - 32 people, and that was the biggest class. And we had more blacks in our class then any of the other groups, you know. And I remember that when we had the big reunion, one of the guys got up and said "Come on Joe" - my brother's name was Joseph - "Come on Joe, hurry up Joe." He had a hip problem and he was slow and someone said "Old black Joe, remember old black Joe?" Well, I thought it was totally inappropriate, because it was 1992 and we were all adults, out of school, out of college, why did you say that? The minorities there just laughed it off, but, to me, it wasn't funny.

I thought some of us hadn't grown at all, and I think the orphanage cured me because when my mother died we went to the orphanage, there were all kinds of ethnic groups at the orphanage. And there were blacks there. That was at least - that was in 54, so they didn't integrate the schools I think until 63 or 62, no, I'm sorry, 60 or 61. No, I guess it was late 50s. Isn't that funny? 56-57 somewhere around there they integrated Cathedral. But see, we were at the orphanage and Frank was, Frank was at the orphanage with me too, so we were used to living with the blacks, so we didn't understand why you wouldn't speak to them walking down the street. That was a big difference, but we were protected at the orphanage too. When I say that, we were home at a Lebanese home. You were there with all of your relatives and you were safe, Well, at the orphanage we were probably safe too, because you didn't go out except for school or to a function that the nuns took you to.

Benter:
Well, let's go there. Your mother passed away and...

DeMolli:
She died of breast cancer in 1955, no â€˜54 or â€˜55, I want to say â€˜55, so I didn't go to the orphanage until...â€™55. She died of breast cancer and, of course, that left my father to take care of four children. And my oldest brother was 16, he was too old for the orphanage, so he went to live with one my mother's sisters. The tragic thing about that was the families, when she died, of course they fought and argued because they never cared for my father. And I think that's where the big thing came in. They were so scared that he would gamble the house away or lose the house, there was 4 of us, so instead of letting him kind of lose it on his own with his gambling and stuff, we came home from school one day and there was nothing in the house! So, because my mother had left her sister as the executive of the will and um...so that was tragic. That's how we ended up at the orphanage. Because we came home and my father had a sister who had married my aunt's cousin, this gets confusing but my father's sister Rosalie had married into the Zehran clan and my mother was a Zehran. So she came when we got home from school and there was nothing there. This was after mom died. She died like March 30th, and we went to the orphanage some time in July or August of that year. So they had to get mattresses and blankets and they had just a huge family explosion. As the priest said, which I saw many years later, "The tribe went into war mode," or something like... he said, because it was a Catholic priest in Fayetteville that was sending us up to the Catholic orphanage and so he had put on there "the tribe" - I'll never forget that! "The tribe is in war mode because of the father and so the kids will be best at the orphanage."

Well my oldest brother could not go, so my twin and my younger sister Kathleen, the three of us went. We all went to the orphanage. And, um, I probably have a copy of the thing that I wrote for the orphanage, because I went back and worked when I got out. I went back and worked as a houseparent with the nuns because we couldn't find a lay teacher who wanted to live with the nuns. But we went to the orphanage and it was strange at the orphanage because we were the only Lebanese kids there, except for my cousin and her brother, the two of them were there also. We didn't even know that they were there and they were not my close cousins, they were on my father's side and they lived in Warsaw and they were both at the orphanage. Their mother had died of, oh gosh, um, cancer but I can't remember what kind - ovarian cancer. And so they were much younger. Connie, my cousin, was like four years old and her brother was like 6 or 7. So they didn't recognize us, and we didn't recognize them until our relatives came. My Aunt Rosalie, they came to see us at the orphanage and then she said, "We're here to see Ester's children, you got cousins here." But they were cousins on the Kannan side. We were not around the Kannans, so there were only five kids that were - that I know about - that were actually Lebanese at the Catholic orphanage. 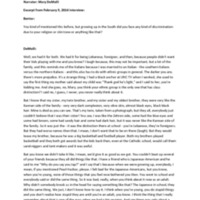