Leroy Benjamin Frasier et al v Board of Trustees of the University of North Carolina, 1955

Leroy Benjamin Frasier et al v Board of Trustees of the University of North Carolina, 1955

Before SOPER and DOBIE, Circuit Judges, and HAYES, District Judge.

This suit seeks a declaratory judgment that certain orders of the Board of Trustees of the Consolidated University of North Carolina, which deny admission to the undergraduate schools of the institution to members of the Negro race, are in violation of the equal protection clause of the 14th Amendment of the Constitution of the United States. The plaintiffs also ask for an injunction restraining the University and its trustees and officers from denying admission to the undergraduate schools to Negroes solely because of their race and color. The plaintiffs pray for relief under Rule 23(a) of the Federal Rules of Civil Procedure, 28 U.S.C.A., not only for themselves but also for all other Negro citizens of North Carolina as a class who possess the qualifications for entrance to the University.

The plaintiffs are three Negro youths who are citizens and residents of North Carolina and graduates of the Hillside High School of Durham, which is accredited by the Southern Association of Secondary Schools and Colleges and by the State Department of Public Instruction of the State. The plaintiffs made formal application for admission to the undergraduate school of the University on April 19, 1955, and accompanied their application with a record of their academic achievements, character and personal references, as required by the rules of the University. On April 27, 1955 they received identical letters from the Director of Admissions in which they were told that the Trustees of the University had not changed the policy of admission of Negroes who were eligible to make application for graduate and professional studies not offered at a Negro college in the state, but were not eligible at that time to apply for admission to the undergraduate schools. Thereupon the plaintiffs requested the University to reverse its policy of discrimination against Negroes and the Board of Trustees in reply, on May 23, 1955, reaffirmed its policy by passing the following resolution:

"The State of North Carolina having spent millions of dollars in providing adequate and equal educational facilities in the undergraduate departments of its institutions of higher learning for all races, it is hereby declared to be the policy of the Board of Trustees of the Consolidated University of North Carolina that applications of Negroes to the undergraduate schools of the three branches of the Consolidated University be not accepted."

The resolution of the Board of Trustees of May 23, 1955, above set out was passed under the authority of these constitutional and statutory provisions. The complaint rests upon the invalidity of this order. There is no constitutional or statutory provision which expressly requires the segregation of the races in the University[1]; and the plaintiffs do not challenge the assertion of the defendants that North Carolina has provided adequate and equal educational facilities for all races in the undergraduate departments of its institutions of higher learning.

We hold, however, that jurisdiction exists in the Court, as now set up, because the statute 28 U.S.C.A. § 2281, requires a three judge court not only when it is sought to restrain the enforcement of an unconstitutional statute, but also the enforcement of an unconstitutional order of an administrative board or commission, clothed with authority and acting under the law of the State. The jurisdiction of a three judge court was sustained under circumstances precisely similar to those in the case at bar in Wilson v. Board of Supervisors, D.C.E.D.La., 92 F.Supp. 986, which was affirmed without opinion in 340 U.S. 909, 71 S.Ct. 294, 95 L.Ed. 657, and Id., 340 U.S. 939, 71 S.Ct. 490, 95 L.Ed. 678. The decision was based on the ground that a three judge court is required when an injunction is sought because of the unconstitutionality of the order of a State administrative board. It is beyond dispute that the State of North Carolina, both by constitution and by statute, has clothed the Board of Trustees of the University with authority to make such rules and regulations for the management of the institution as they deem necessary and expedient, and it follows that the regulation now under attack must be considered a "statute" to which the State has given its sanction within the meaning of the jurisdictional provisions of 28 U.S.C. § 2281. See American Federation of Labor v. Watson, 327 U.S. 582, 592, 66 S.Ct. 761, 90 L.Ed. 873; Oklahoma Natural Gas Co. v. Russell, 261 U.S. 290, 43 S.Ct. 353, 67 L.Ed. 659. In McCormick & Co. v. Brown, 4 Cir., 52 F.2d 934, 937, it was said: "* * * it is settled that a court of 592*592 three judges is required not only when the constitutionality of the state statute is involved, but also when the constitutionality of an order of a state administrative board or commission, purporting to be authorized by state statute, is drawn into question." See also Suncrest Lumber Co. v. North Carolina Park Comm., 4 Cir., 29 F.2d 823, appeal dismissed without consideration, 280 U.S. 615, 50 S.Ct. 13, 74 L.Ed. 656.

It will have been noticed that the resolution of the Board of May 23, 1955, excluding Negroes from the undergraduate schools of the University, was promulgated after the decision of the Supreme Court in Brown v. Board of Education of Topeka, Kansas, 347 U.S. 483, 74 S.Ct. 686, 692, 98 L.Ed. 873. In that case on May 17, 1954, the Supreme Court held that "in the field of public education the doctrine of `separate but equal' has no place", and that the segregation of white and Negro children in the public schools of a State solely on the basis of race denies to Negro children the equal protection of the laws guaranteed by the 14th Amendment.

The only answer to this far reaching decision, and the only defense on the merits of the cases offered by the defendants in this suit is that the Supreme Court in Brown v. Board of Education of Topeka, Kansas, decided that segregation of the races was prohibited by the 14th Amendment only in respect to the lower public schools and did not decide that the separation of the races in schools on the college and university level is unlawful. We think that the contention is without merit. That the decision of the Supreme Court was limited to the facts before it is true, but the reasoning on which the decision was based is as applicable to schools for higher education as to schools on the lower level. Chief Justice Warren, speaking for the Court, said, 347 U.S. at page 493, 74 S.Ct. at page 691:

"Today, education is perhaps the most important function of state and local governments. Compulsory school attendance laws and the great expenditures for education both demonstrate our recognition of the importance of education to our democratic society. It is required in the performance of our most basic public responsibilities, even service in the armed forces. It is the very foundation of good citizenship. Today it is a principal instrument in awakening the child to cultural values, in preparing him for later professional training, and in helping him to adjust normally to his environment. In these days, it is doubtful that any child may reasonably be expected to succeed in life if he is denied the opportunity of an education. Such an opportunity, where the state has undertaken to provide it, is a right which must be made available to all on equal terms."

"`Segregation of white and colored children in public schools has a detrimental effect upon the colored children. The impact is greater when it has the sanction of the law; for the policy of separating the races is usually interpreted as denoting the inferiority of the Negro group. A sense of inferiority affects the motivation of a child to learn. Segregation with the sanction of law, therefore, has a tendency to (retard) the educational and mental development of Negro children and to deprive them of some of the benefits they would receive in a racial(ly) integrated school system.'"

"We conclude that in the field of public education the doctrine of `separate but equal' has no place. Separate educational facilities are inherently unequal."

In view of these sweeping pronouncements, it is needless to extend the argument. There is nothing in the quoted statements of the court to suggest that the reasoning does not apply with equal force to colleges as to primary schools. Indeed it is fair to say that they apply with greater force to students of mature 593*593 age in the concluding years of their formal education as they are about to engage in the serious business of adult life. We find corroboration for this viewpoint in the decision of the late Chief Justice Vinson in Sweatt v. Painter, 339 U.S. 629 at page 634, 70 S.Ct. 848 at page 850, 94 L.Ed. 1114, where, in commenting upon the inequality which inheres in the segregation of the races in graduate schools maintained for the teaching of law he said.

"Moreover, although the law is a highly learned profession, we are well aware that it is an intensely practical one. The law school, the proving ground for legal learning and practice, cannot be effective in isolation from the individuals and institutions with which the law interacts. Few students and no one who has practiced law would choose to study in an academic vacuum, removed from the interplay of ideas and the exchange of views with which the law is concerned. The law school to which Texas is willing to admit petitioner excludes from its student body members of the racial groups which number 85% of the population of the State and include most of the lawyers, witnesses, jurors, judges, and other officials with whom petitioner will inevitably be dealing when he becomes a member of the Texas Bar. With such a substantial and significant segment of society excluded, we cannot conclude that the education offered petitioner is substantially equal to that which he would receive if admitted to the University of Texas Law School."

Finally, the defendants contend that the pending suit should not be sustained as a class action and the judgment should be confined to those who have appeared and asserted their rights. The representatives of the University seem to be apprehensive that a judgment in favor of all Negroes in North Carolina who may apply for admission to the University may deprive the Board of Trustees of their power to pass upon the qualifications of the applicants. Such is not the case. The action in this instance is within the provisions of Rule 23(a) of the Federal Rules of Civil Procedure because the attitude of the University affects the rights of all Negro citizens of the State who are qualified for admission to the undergraduate schools. But we decide only that the Negroes as a class may not be excluded because of their race or color; and the Board retains the power to decide whether the applicants possess the necessary qualifications. This applies to the plaintiffs in the pending case as well as to all Negroes who subsequently apply for admission.

A judgment and an injunctive order in accordance with this opinion will be issued.

[1] Segregation of the races in the public schools of the state, provided for children between the ages of 6 and 21 years, is directed by Article IX, Section 2 of the State Constitution; but the defendants contend that this provision does not apply to the University. We need not pass on this contention because, as we have said, the Board of Trustees acted under the authority conferred upon them by the Constitution and laws of the state when they excluded Negroes from the undergraduate schools of the University. 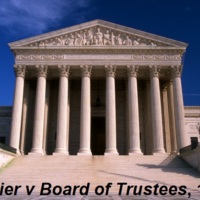