William â€œBillâ€ Friday served as president of the UNC system from 1957-1986. Friday has 25 interviews as part of the Southern Oral History Program. The following excerpts are taken from a 1991 interview, where Friday discusses the UNC systems relationship with the department of Health, Education, and Welfare (HEW) as they attempted to work out a plan to desegregate North Carolinaâ€™s colleges and universities.

A: But they took on systems like ours and the state of Georgia, for example, because here you had multiple institutions, and what they hit upon was the notion that where you have them in contiguous situations, such as North Carolina Central and Chapel Hill being twelve miles apart, North Carolina A&T and UNCG being in the same town. And here, they thought, the only way they could dramatically show the movement of people was to get in a position where they would say to us, "Where you have institutions that are geographically â€” in geographic proximity â€” and each has the same departments, then one should close, and the students and faculty were moved to the other." For example, they said that Chapel Hill, you had schools of education at Chapel Hill and Central, and you had schools of business at Chapel Hill and Central. So, the best way to increase enrollment would be to close the School of Business in one place, and to close the School of Education in the other place. We asked the obvious questions, as academic people, "Well now, what about tenure of contracts?" "What about admissions standards?" And the obvious necessity of the institutions, getting people who are qualified to perform in the particular discipline, because it's not just what color you are it's, "What are you prepared to do?" And, "What about the sequence of courses, degree requirements?" All the obvious questions that you should ask, we did. They would never accept this. They said, "This is not germane. We want to see bodies move." Well, we said, "It won't happen. Because you can't order faculty people to teach at a certain place.
You can't require students â€” this is not pupil assignment." You have that in the high schools and the secondaryâ€”in the school system, but not in college. Because you have to pay for the privilege of going to college, as an individual. So, we kept â€” this kept in contention for months and months. Georgia decided they'd do it. And in the city of Savannah, there were contiguous institutionsâ€”Savannah State and Armstrong State, and they went through this ritual of closing one here, and one there. And I have not been back there, but I asked the people from Georgia not so long ago where they were, and they said it brought on utter chaos, and they were never able to work it out. . . .

Q: The basic issue here in the HEW case, however, wasâ€”in a way, had very little to do â€” as I understand it, with civil rights. It had to do with educational autonomy.

A: That's right. It was the civil rights people were using their â€” they were using the strategy of allocation of function to achieve numbers. Our position was, however, you achieve numbers this is no way to do it. And we're not going to be a party to it. You can go to court and try it, but we'll tell you right now, in all good spirits, and we did. It was all in goodwill. . . .

Q: When did it begin to come to your desk?

A: Well, you tried to keep it there. But knowing that it was a Federal case. Knowing that it was a political issue. Knowing that you had as many predominately black schools as we had, no president would dare not keep up with it. So, you just added it to the list of things that were always on your desk. And it began to grow in intensity. And we negotiated one agreement, you remember, Raymond, I'm sure told you. Had it accepted, came home, every things fine. Changed administrations. Bingo. Off again. It teaches you something about the flow of government, too. The analysis of this whole experience, simply as a political science issue, would be fascinating to a graduate student, because the flip-flop in it was at the Federal level, and it was at least a half a dozen times. We changed not once, because we knew and believed in the rightness of what we were doing. But I don't mind telling you, it hurt, when people would accuse you, really, of outright racism for the position you were taking. Like the attorney for ACLU.

Q: Julius Chambers was on the Board of Governors at the time?

A: But he resigned. He left. And he left in protest. He said that the University should be doing more. You couldn't argue with Julius. He's a very intelligent, very able person. He's up there now heading the Legal Defense Fund. You don't see much of him because he's not an extrovertish in the sense of attention-getting. And he and I were friends. And still are, I hope. I don't have any reason to know that we're not. But, here again, he was doing, you know, what he had to do. I respected that. Not only as a matter of conscience, but who he was representing and how he went about it. And I hated to see him leave the Board, because I felt that if he had stayed there and argued within the machinery, we would have gotten along so much faster. But when he left I said that to him. I was sorry to see him go. But that was his choice. He'd decided he had to do it.

Q: Did he make a case while he was on the Board?

A: Yeah â€” well, he argued that case all the time. But in a very decent and lawyer-like way. I was always impressed with him, because he was very systematic, and he led his class down here, in the Law School. Which lets you know you're dealing with a person who had some really first-rate intelligence. And he was using his mind. He didn't come at you with these harangues of emotion. He worked where you had to work to change the law and to change the attitude of people. A very good man. 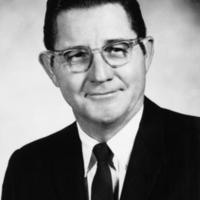