This collection features documents and images from North Carolina State University's Special Collections Research Center relating to State's Mates, an organization of student wives that operated from the late 1940s to the mid-1970s. The bulk of the material was produced by the organization itself, including yearbooks, newsletters, correspondence, programs, and photographs. Newspaper articles from The Technician, The News & Observer, and The Raleigh Times are also prevalent in this collection. 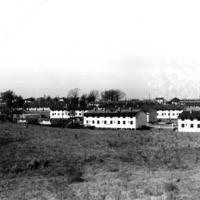 Many State's Mates lived in Vetville until its demolition in the late 1950s. Vetville housed veterans and their families that came to North Carolina State College as a result of the G.I. Bill. 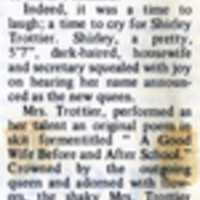 In this article from the Technician, Mary Porterfield covers the Mrs. NCSU pageant but highlights the lack of an audience at the event; she suggests having a Miss NCSU pageant would attract more attendees.

This letter was written by the president of States Mates to Dr. Harry Kelly and his wife thanking them for distributing Good Wife Diplomas at the special ceremony for wives of senior male students.

View the items in The Good Wife Diploma