In this editorial published in April 2010, Russell Witham, the executive editor of the Technician, commented on a proclamation by Bob McDonnell, the governor of Virginia, declaring April 2010 as "Confederate History Month." Witham used the controversy to present an analysis of history as "irrelevant," "unconscionable bias[ed]," "politically motivated," and "inherently subjective."

Bob McDonnell, the governor of Virginia, set himself in the middle of a category-5 media storm the last couple weeks as a result of his proclamation declaring April 2010, "Confederate History Month."

Despite the long record of months celebrating the history of the Confederacy — particularly in Virginia, the former capital of the Confederate States of America — the decree, at the behest of the Sons of Confederate Veterans, drew the ire of the NAACP and Virginia Legislative Black Caucus because it failed to mention one of America's most profound blemishes, slavery.

As a result of the slip, which he subsequently corrected with a second statement bashing slavery with a 9-iron, liberal pundits have taken him to town on the issue — portraying him as a racist prick.

These images of McDonnell certainly miss his intentions and long history of equitable and bold advocacy on the behalf of Virginians. But in the end, all the complaining doesn't matter anyway.

History, for all intents and purposes, has become irrelevant. Why, you may ask? Because history is just a story, it's not really an account of the facts. History textbooks are no less slanted than this column. They portray an unconscionable bias and fail to produce a true picture — they're more modernism, less Baroque.

Confederate History Month — nor any history month — has reason for celebration because the books don't allow for an accurate reflection on the events. History isn't the final draft of events, it's the subjective end that celebrates the winners and vilifies the losers.

I'll illustrate the point for you with an analysis of Thomas Jefferson and Jefferson Davis. One is idolized as the quintessential founding father, while the other is ridiculed as a leader in one of America's darkest hours.

Are the two really that different, though? Jefferson was a slave owner and xenophobe who opposed women's suffrage and was at the forefront of the anti-federalist movement. His moral objections to slavery are well documented, but they surely weren't strong enough for him to set his slaves free, which would have caused him to default on his debt and live a life of poverty. That's not quite the same as the image of the proud statesman, who served as president, ambassador to France and secretary of war.

Now, let's reflect on Davis. He was also a slave owner and anti-federalist, but was revered as a war hero and public servant when he served as Franklin Pierce's secretary of war and was outspoken in his belief that succession was wrong for the country.

Are they really that different? Or for that matter, is Davis any different from his fellow West Point graduate Robert E. Lee, who also opposed succession, but is now remembered as a bold hero on both sides of the Mason-Dixon? No.

If we take an honest appraisal of the men, Jefferson could have easily been a leader of the Confederacy had he lived another 30 years. A lifelong Virginian and anti-federalist would have probably made the same choice Lee made.

History is written by the winners, and it's just not that interesting without the villains. Lucas cast Vader, World War II had Hitler and Americans have Davis.

I'm not trying to make an argument for slavery or the obvious faults of America's forefathers. But I am trying to point out an obvious truth: history is reliable at telling us what we want to hear, not what actually happened.

Davis wasn't a villain, he was a concerned American who identified with half of the country in the 1850s; Hitler may have been crazy, but he brought millions of Germans out of the poverty the Treaty of Versailles inflicted on them after World War I; and Vader was nothing more than a precocious boy from Tatooine who never had a strong father figure.

Confederate History Month is a farce, but not because McDonnell failed to mention slavery. It's a joke because history is politically motivated and inherently subjective.

Don't fret though — I hear pre-1887 history is going out of style anyway. 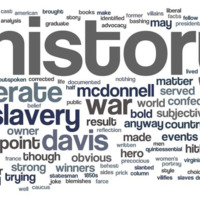