"The Double Life of Afrikan-American Women"

"The Double Life of Afrikan-American Women"

This editorial cartoon depicts a woman's face, half of which has short, dark hair, full lips, and thick eyebrows, physical characteristics that are often associated with African American women. The other half of the face features long, light hair, thinner lips, and thinner eyebrows, physical characteristics that are often associated with white American women. The cartoon's caption, "The Double Life of Afrikan-American Women," suggests that the cartoon is commenting on the ways in which African American women feel pressured to conform to "white" norms and standards of beauty. As many articles in The Nubian Message argue, mainstream media often contributes to this pressure because African Americans are underrepresented in media outlets. 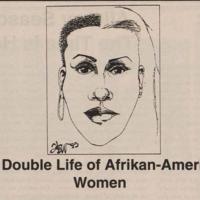