1982 was the third successful year of the Research Apprenticeship program. While the program took place in the School of Agriculture and Life Sciences, the entire focus of the program was not purely on agriculture. The Associate Director of the SALS wrote on March 9, 1982 to high school teachers and counselors "the primary thrust is to stimulate interest among the minority communities in science related careers. It is hoped that the participating students will establish a close working relationship with active research scientistso assist students with encouragement and advice on careers and college for further education." Nationally, many of the students career goals were not in agriculture, but the program influenced many participants to pursue a scientific occupation. The students at NC State valued their exposure to research and lab work. Students reported their ideas about the agricultural and biological sciences had expanded, and they were aware of the many opportunities in the field. Therefore, NC State successfully exposed the complexities of agricultural research to the students, and several students were interested in attending NC State. Historians can thus interpret that inclusion of minorities is a positive experience for NC State.
The students' names are omitted for privacy.

USDA, Dr. H.B. Craig Associate Director of Academic Affairs in the School of Agriculture and Life Sciences, and participants of program.

Educational Plans. Most apprentices said the program affected their thinking on whether or not to attend college and whether or not to pursue advanced training. Although their commitment to higher education may have been intensified, apprentices planned as many years of schooling before the program as after, with most expecting to attain a doctorate or first-professional degree.

Career Savvy. Career savvy refers to a comprehension and appreciation for what being a scientist entails. Apprentices for the most part said their understanding of the everyday aspects of work had improved quite a lot (74 percent so stating), as had their knowledge of how to do research (65 percent), their knowledge of the food and agricultural sciences (66 percent), their knowledge about strengths and weaknesses (52 percent) and their work-habits (53 percent). Thirteen percent or fewer said they had improved very little or not at all in these respects. Scientists corroborated the gains by apprentices in career savvy.


The excerpted transcription is a collaboration of student evaluation answers to questions provided by the School of Agriculture and Life Sciences. This transcription allows researchers to easily view the data. See PDF for full document.


1. What are your career plans?
2. Has the program provided the type of learning experience you expected?
3. What was the most significant learning experience you had
4. Did you feel that the area in which you worked was the best one for your particular case?
5. One of the basic reasons (objectives for the conduct of this program was to aquaint you with some of the research that is being conducted in the School of Agriculture and Life Sciences. Have your ideas about research in the agricultural and biological sciences changed since you have been a part of the program?
6. If you have not made a career (academic) choice, would you now have any interest in the agricultural sciences as a career? Please explain.
7. Did your research supervisor give you the guidance and supervision you thought you should have had? 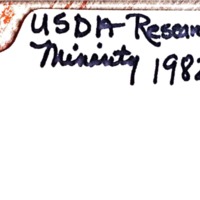